By being adaptable and accessible, OERs have the potential to solve the global education crisis and contribute to sustainable economic growth - if governments are prepared to act. 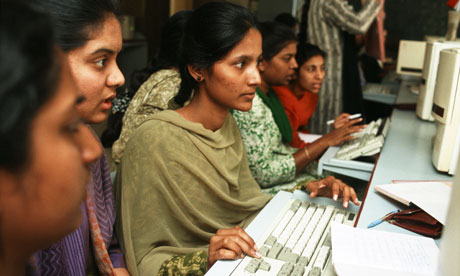 In the Guardian Professional Sir John Daniel, knighted for his contribution to education, served as president and CEO of the Commonwealth of Learning from 2004 to 2012 and as Unesco's assistant director-general for education from 2001 to 2004 and David Killion is the US ambassador to Unesco. He led the US delegation to the World OER Congress
commented that Open Educational Resources (OER) as the key not only to solving the global education crisis but to unlocking sustainable global growth in the 21st century- that is, if governments are ready to seize on their potential.

OERs are learning materials that can be accessed, used, and transformed by anyone, anywhere.

Though the concept is simple, the economic potential is tremendous and the advantages are two-fold: First, OERs can lower education costs substantially. OERs can also help universities reduce their marketing costs. Open resources have been a boon for recruitment: 35% of MIT applicants tell their admissions office that they chose MIT after they looked at its OpenCourseWare. Open resources can also help bolster a school's global reputation: 91% of visitors to Open University's page on iTunes U are from outside the UK.
But what was crystallised at the Unesco Congress are the larger economic implications of the OER movement and its potential to dramatically expand the global knowledge economy. By making education more accessible and adaptable to the changing needs of the global economy.
Alredy there is mounting evidence that learners can be trained more quickly using OER. A recent study conducted by scholars associated with Carnegie Mellon University's Open Learning Initiative demonstrated that students who use OERs can obtain the same or better learning outcomes in half the time compared with students using traditional methods. This means that OERs can be used to create a better trained, more flexible global workforce for the 21st century.
The OER movement has been steadily gaining momentum since its inception, as more and more individuals and institutions discover its extraordinary potential. Over 400,000 teachers have benefited from the Teacher Education in Sub-Saharan Africa program, whilst the Open University's OpenLearn website has had more than 21 million visits since its launch in 2006. One by one, the world's most prestigious universities are launching new OER initiatives. In May, Harvard University announced it would join forces with the MIT to create edX, a platform that provides free access to rigorous online courses to students anywhere in the world. Stanford University is planning a similar venture.
Initiatives like these are remarkable, but higher education activities can only go so far. Governments are by far the biggest suppliers of education worldwide. They have the most to contribute to the OER movement and the most to gain in terms of cost savings and economic growth.
The first Unesco World OER Congress concluded with a declaration that urged governments to play a more active role in supporting this movement, which has, to date, been largely funded by a few supportive foundations. This call to action is about more than education. It is about widening the circle of those able to contribute to renewed economic growth. Governments around the world would do well to heed that call.

I wrote about the declaration in my blogpsot
Posted by Ebba Ossiannilsson at 11:26 AM 5 comments:

The Paris Declaration was approved on 22 June 2012, in Paris, France at the World OER Congress by acclamation by a gathering of more than 250 people, with many governments represented. The UNESCO Expert Meeting had both governments, educational and OER experts present. The Declaration represents the advice of the 'experts' to governments, on which it is non-binding.

The term Open Educational Resources (OER) was coined at UNESCO’s 2002 Forum on Open Courseware: OER is understoood as:

“teaching, learning and research materials in any medium, digital or otherwise, that reside in the public domain or have been released under an open license that permits no-cost access, use, adaptation and redistribution by others with no or limited restrictions. Open licensing is built within the existing framework of intellectual property rights as defined by relevant international conventions and respects the authorship of the work”;

The declaration recommends that States, within their capacities and authority:
Foster research on the development, use, evaluation and re-contextualisation of OER as well as on the opportunities and challenges they present, and their impact on the quality and cost-efficiency of teaching and learning in order to strengthen the evidence base for public investment in OER.
Encourage the development of user-friendly tools to locate and retrieve OER that are specific and relevant to particular needs. Adopt appropriate open standards to ensure interoperability and to facilitate the use of OER in diverse media.

Ed Yourdon, CC-BY-SA
Some questions to start with:
How will individuals around the globe benefit from the recommenndations and how can the implementation and mainstreaming speed up?

What are now the next step for countries around the globe to adopt the recommendations?

Could/or should the recommendations be benchmarks for policy uptake as is suggested by the POERUP project?

Posted by Ebba Ossiannilsson at 8:33 AM 5 comments:

What is a 21st century teacher?

There is an ongoing discussion in the edcuational sector on the millenium learners, next generation learners, Gen Y, 21st century learners etc, a  beloved child has many names..Main issues which use to be expressed and discussed are as is done by OECD already in 2006:

The main issues used to be addressed  are the following  by OECD:

So who are they then? Millennials is a term widely used to designate those generations born from the 1980s onwards and who have been raised in a context where digital technologies form an inextricable part of daily life. In short, Millennials are the first generation to grow up surrounded by digital media, and most of their activities dealing with peer-to-peer communication and knowledge management, in the broadest sense, are mediated by these technologies. Accordingly, Millennials are thought to be adept with computers, creative with technology and, above all, highly skilled at multitasking in a world where ubiquitous connections are taken for granted. This is why they are also often referred to as the Net Generation or even the homo zappiens (Veen, 2003) for their ability to control simultaneously different sources of digital information.Veen argues for the need for New Education Systems. This is tue, and there are urgent needs for transformations of educational systems.

What is less discussed is the issues on what and who is the 21st century teacher? This was done in a blogpost by Joe Stumpenhorst, June 22nd 2012. Thanks for this valuable blogpost.

Stumpenhorst advocates that althoug people toss around and speak about education attaching the word 21st century to appear to cutting edge or to be on the front end of trending ideas and things are so-called 21st century, yet there are no differences from ideas fo the past, from 20th or 19th century. Stumpenhorst emphazes the role and some key characteristics that good 21st-century teachers need. To summarize


Be a connected educator. The idea of being a connected educator is not necessarily new, but it is certainly transformative through the technology of social media. Teachers can connect with other teachers, administrators, parents, students and other education-minded people worldwide with the click of a button.  Regardless of what kind of tools you use, a good 21st-century teacher must be connected.
Be a master of technology.  A good 21st-century teacher knows the difference between what is shiny and new conserning technology and what truly has potential to transform learning for students. A new hammer is great, but a good carpenter doesn’t try to screw in a bolt with one. In the same way, a 21st-century teacher knows what tools are needed and when and how to use them.
Be a reflective practitioner. This is probably one of the most important areas as the profession in many ways has not changed in 100 years. Tools in our classrooms have changed, but the pedagogy and practice have not. A 21st-century teacher is able to look at his or her practices and adapt and change based on the needs of learners. The learners need to be in the centre, personalized learning, learning on demand and lifelong learning. Too many teachers are teaching as they did when they started their careers 10, 20 or 30 years ago. What we know about student learning and motivation has changed; so, too, must the art of teaching. Stagnation is the death of any teacher.
Be an advocate. The final thing  important for good teachers in this century is to be an advocate for themselves as well as the profession.  As teachers, we can sit and complain about it … or we can do something about it and find ways to tell our stories. It is a critical time in the history of education and how the profession is perceived in the public eye.

There are urgent needs for many directions of innovation for the 21st century...

None of these ideas is radical or groundbreaking. Yet, too many teachers are content wrapping up old practice with new gimmicks and wondering the reason we don’t improve. To gain respect as a profession, a 21st-century model of constant growth and improvement must be embraced. If we don’t get better, there is just ourselfes we can blame.

Follow Josh Stumpenhorst on his blogs at Stump the Teacher, which has received EduBlog Awards nominations, and tweets @stumpteacher.

Posted by Ebba Ossiannilsson at 12:34 PM No comments:

"OER Services believe that an OER Practitioner should not have just one single perspective on OER but should know something about all the fields which are related. Furthermore, an "OER Practitioner" should also know about the different stages in a lifecycle of OER, from the identification, via the modification to the publishing. Finally, it is important to also know about the different stages in an organisation, or the practice, of OER: Planning, implementation and evaluation."